Einstein’s Camera – How one renegade photographer is hacking the concept of time.

Adam Magyar is a computer geek, a college dropout, a self-taught photographer, a high-tech Rube Goldberg, a world traveller, and a conceptual artist of growing global acclaim. But nobody had ever suggested that he might also be a terrorist until the morning that he descended into the Union Square subway station in New York. At the time, Magyar was immersed in a long-running techno-art project called Stainless, creating high-resolution images of speeding subway trains and their passengers, using sophisticated software he created and hardware that he retrofitted himself. The scanning technique he developed—combining thousands of pixel-wide slices into a single image—allows him to catch passengers unawares as they hurtle through dark subway tunnels, fixing them in haunting images filled with detail no ordinary camera can capture. 20 Signs You Booked The Cheapest Hotel In Town 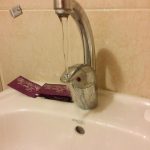